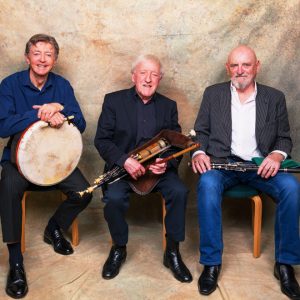 Their ability to transcend musical boundaries to blend tradition with modern music has notably hailed them as one of the most renowned and revered musical groups to this day.

For over fifty years the Chieftains have been bringing their traditional Irish music to music lovers across the globe. Although they worked throughout the 60’s the group became a worldwide sensation after working on the Academy Award winning soundtrack to Stanley Kubrick’s film Barry Lyndon in 1975. In 1988 they worked with Van Morrison on the critically acclaimed album, Irish Heartbeat. Since then they have done collaborations with artists such as Madonna, The Rolling Stones, Elvis Costello, Luciano Pavarotti and Roger Daltrey as well as performing in front of Pope John Paul II and Queen Elizabeth II. Their artistic achievements include six Grammy Awards, an Emmy and a Genie. In 2002 they were given the Lifetime Achievement Award by the UK’s BBC Radio 2. To many, The Chieftains have put traditional Irish music on the map across a wide variety of genres. The current lineup includes Kevin Conneff and Matt Molloy led by the incomparable Paddy Moloney.